Smokers have been under fire for years about their habit. Slowly we are seeing a decrease in the number of people smoking, but the litter is rising.

Cigarette butts are the number one most found item of trash on beaches all around the world, second only to gum. If you’re interested I’ve got a great article where you can find out: Is gum biodegradable?

They think other 4.5 trillion cigarette butts are in the environment today if that is the case, what the hell are we doing?

Every day we watch smokers carelessly chucking cigarette butts on the floor. I’m going to share the effects this is having on our planet.

I’m sure at some point in your life, you’ve looked at cigarette filters on the floor and wondered what they’re made from. It might look like harmless white cotton, but it’s not.

What there actually made of is a plasticized cellulose acetate, which, is not biodegradable at all. It’s very much the opposite.

Plastic cellulose acetate filter was a marketing ploy, designed in the hope of making the American population believe it made a “healthier experience.”

What it really did was allow companies to brand a luxury cigarette, which of course cost more money. Now, many people know the truth about the harmful toxins within, yet people continue to drop them on the floor.

Recently plastic straws became victimized on social media for killing animals. But, what about cigarette litter? It’s got to be worse then straws, right?

The chemicals that get “filtered” through the cigarette filter gets discarded and makes its way into our water system.

It doesn’t just hurt the water system. It hurts the whole environment; the soil we plant food in is being found with the same chemical components inside.

Toxins are then left to go into the plants and animals we eat. The cycle just isn’t sustainable.

Litter has been getting so bad. Groups are trying to set motion on for the elimination of cigarette waste.

Out of 1 trillion cigarette filters are used every year, it’s thought that only one-third of them are discarded correctly, although this is just an estimated number. That’s a staggering amount of litter being created every year.

The question is what happens? Can they degrade over time?

Cellulose acetate is not designed to decompose; it’s a plastic after all. But, it will break down into small pieces when exposed to sunlight. This could take anywhere 18 months to 10 years.

That doesn’t mean it disappears after 10 years; in fact, it will never completely disappear!

The little pieces of micro-plastic get left in the soil or make there a way to the ocean.

Micro-plastic doesn’t just have harmful consequences for our environment, but it’s making it’s way into our system too. The food we eat and the water we drink is all exposed to our cigarette litter.

A study recently identified several of these toxins which include nicotine have been found in water sources. They wanted to test the effects cigarette butts were having on marine life. 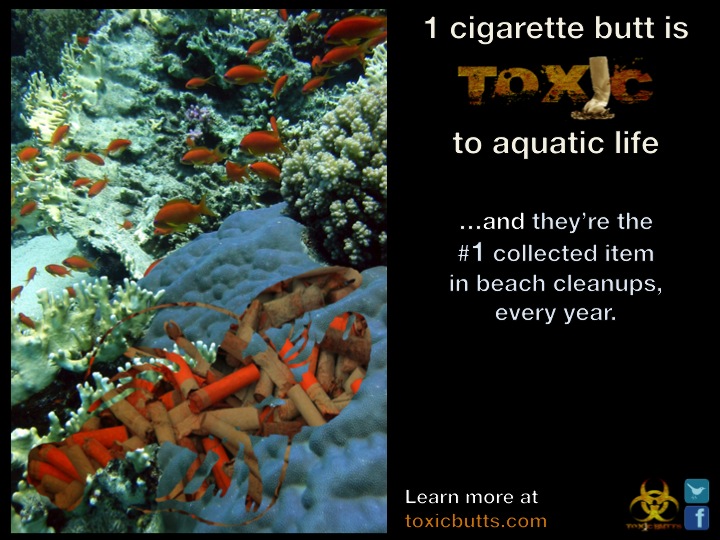 In both experiments, 100% of the wildlife died within 2 days.

In order to stop further pollution, companies are looking for new ways to make cigarettes butts clean. We need to share some responsibility and start disposing of them correctly.

If they don’t degrade, how do we dispose of them correctly?

For a long time, there was no clean way of disposing of your cigarettes. Anyone responsible would but them in the bin, but then they just ended up in a landfill site.

Recently, companies like Terracycle have found a use for our biggest cause of trash. Their aim was to keep trash off the streets. All their recycled cigarettes butts are turned into pallets.

When cigarettes account for one-third of all litter it’s great that people are trying to find a use for the waste. Hopefully, we can watch our cities to become butt free in the near future.

Are There Any Biodegradable Cigarette Filters?

We have now seen a rise in companies making biodegradable filters in an effort to stop people needing to recycle cigarettes.

GreenButts has been working in making an organic filter made from hemp and wood pulp, which then biodegrades leaving no bad toxins.

If that sounds good, you should listen to this one.

Karma Tips pushed it a little further. Once dropped on the floor theirtips biodegrade into the herbs:

In terms of creativity, you have to admit it’s pretty cool. Small American companies are always looking for new and interesting ways to overcome our trash crisis.

So, although cigarette filters don’t biodegrade, we are looking at the new generation of people looking to share their expertise and create a cleaner world.

I’ve great a great article about plastic straws, it shows the implications they’re having on our wildlife. Definity worth a read!

We need to spread the word for a cleaner world.