The definition of biodegradable plastic is that the product should be capable of decomposing with the presence of bacteria or other living organisms and turned into:

Over the last couple of years you might have noticed an increase in supermarket labels claiming to be biodegradable, it suggests that that the plastic material will degrade over time.

Unfortunately, this is not always the case!

What Is Biodegradable Plastic Made Of?

When you think of biodegradable plastics, you might think it’s made from natural materials, and sometimes that is true.

But, they often contain micro-organisms and petrochemicals like many other traditional plastics. 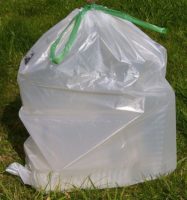 Even biodegradable plastics that use raw materials to produce the plastic bag contains other additives.

These chemicals are added to the synthetic plastic mix to rapidly increase the decomposition speed with the presence of sunlight and oxygen.

You’ll also find that large quantities of corn are being used in the process of making a polylactic acid (used for making traditional plastics). Which, is then mixed with fossil fuels and other additives to create the biodegradable plastic we know.

To give you a better understanding of what biodegradable plastics can be made from. I think it’s a good idea to explain the different styles and standards that plastic materials are made from.

Bioplastic – Are made from natural resources such as sugarcane, wheat, or corn, it was considered to be the most environmentally friendly option. Unfortunately, due to the cost of making the plastic, it got ditched by most manufacturers.

Biodegradable Plastic – Is made in a very similar way to traditional plastic. The significant difference being is they add petrochemicals to increase the speed of plastic in breaking down.

Which leads me onto my next point:

This is a great question, and I mean what’s the point of biodegradable plastic bags if they don’t work?

Over the years, many scientists have been trying to figure out if biodegradable plastic actually makes it better, or if we are making things worse.

Which is where I found a study from Imogen Napper and Richard Thompson at the University of Plymouth, they set out on a task to find out how long it took for plastic to decompose.

The findings are pretty worrying!

For the study, they tested all styles of “biodegradable plastics” on the market:

The different plastics was then left, either exposed to oxygen, soil, or seawater in order to monitor the different rates of decomposition.

The good news is that all the plastics broke down when exposed to natural air within nine months, maybe there was some hope.

But, unfortunately, this is where the results became worrying. Out of the four, only three plastics:

All remained fully functional; Even after three years in soil or seawater. The only one that passes there testing was the compostable plastics.

I don’t know about you, but that’s a long time!

So, is plastic biodegradable? Does it work?

Well, from my point of view, they don’t meet my exceptions. I mean when you talk about a plastic bag being biodegradable you’d never expect it would be functional after three years.

How Long Does Biodegradable Plastic Take To Decompose?

In the previous section, we touched on this subject briefly, and there is one thing I’m sure we can agree on. It can take a long time for plastic materials to break down entirely.

It looks like there is no particular time-frame, mainly because there is so many different grades of plastic and each one has a different rate of decomposition.

I put this down to there being no legal standards when to test their biodegradability.

Unfortunately, we all believed that biodegradable plastics would break down quickly. As you might be starting to notice, this isn’t always the case.

So, why don’t these plastic materials breakdown as quickly as we’d like to see?

It comes down to the conditions required for biodegradable plastics to break down.

So what are the perfect conditions?

When you take a look at the conditions needed for plastics to breakdown. You can see why they’re not decomposing in don’t decompose in compost heaps, soil, or the ocean.

It just can’t reach the necessary temperature needed (60°c). It doesn’t help that it gets covered in a mountain of trash, eventually sealing out the oxygen.

Is Biodegradable Plastic Good For The Environment?

You might think you’re helping the environment, I mean it’s advertised as the magic bullet that will save the planet from plastic.

Sadly this isn’t the case, so Why is biodegradable plastic terrible for the environment?

To start with, they don’t degrade as advertised, from what I can see they’re just not designed to break down without being exposed to the right conditions.

Many members of the European Parliament tried to ban the production of oxo plastics entirely. Regrettably, they failed, we can only hope they keep pushing forward with this.

Harmful toxins are getting left behind from the breaking down process. Tiny pieces of plastic are ending up in our ocean. In turn, this is damaging the marine life we see today; the very food we eat is getting contaminated with microplastics.

I’ve also found that biodegradable plastics don’t account for the pesticides and herbicides used when making the materials. What does this mean?

All the harmful chemicals that have been used are returned to the earth. With some extra toxins thanks to plastic.

I mean we can’t even compost biodegradable plastics without threatening our food with toxins produced from the plastic.

The only option is to start using biological sources to make the plastic and cut out the chemicals.

The damage doesn’t end there. Bioplastics are creating a threat to the recycling system as it tends to end up in landfill sites. If the plastic does breakdown, it admits methane which, as you probably know, is a massive threat to our greenhouse gases.

The world is suffocating in plastic, and we need to act before it’s too late. 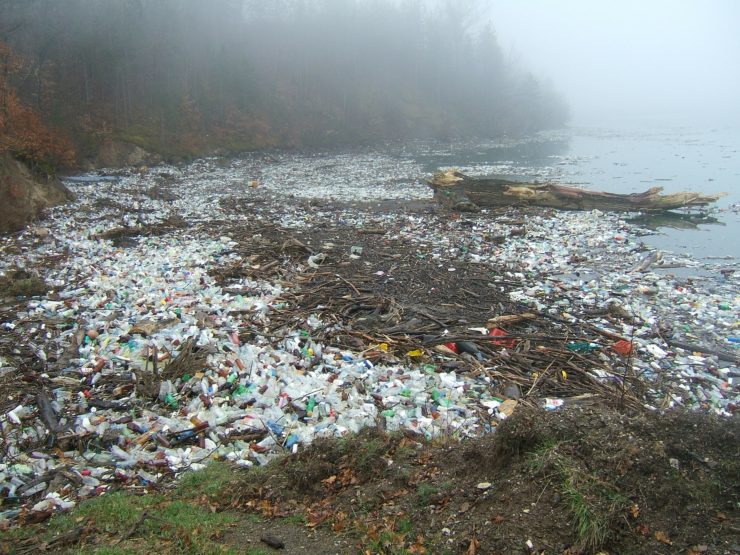 Luckily, scientists are working to find the answer to the plastic crisis; they’ve now invented a plastic that can dissolve in water which is safe enough to drink.

Maybe there is hope.

It’s certainly a step in the right direction.

Ramani Narayan, a university professor, has explained the consequences we face. He said, “What is known is that conventional petroleum-based plastics never really go away.” He also added, “It creates more harm when it breaks down. It works its way into our food chain.”

Is there anything we can do to help?

The other option is to refuse using single-use plastics whenever possible. Taking a bag with you is a great alternative to using more plastic bags.

What Are The Benefits Of Biodegradable Plastic?

I’ve been very harsh on biodegradable plastics. So, I’m going to take a break, so we discuss some of the good points.

It could be the reason we’re starting to see a massive reduction in companies using standard plastic supplies. , and moving over to slightly more sustainable:

Which does use less energy than traditional plastics, and leaves us with a reduction in our carbon footprint.

The most significant benefit I see is the reduction of fossil fuels; with our planet on the verge of getting smoked out by the emissions, we release.

What Are The Disadvantages Of Bioplastics?

Let’s start with they can’t degrade unless left in the right conditions, and 90% of the time will never see the right environment. Most of them end up in landfill sites unable to breakdown.

You can also argue on the effects it has on our greenhouse gases. Right from the process of making the biodegradable plastic to it ending up in a landfill site, it kicks out a massive amount of emissions.

The manufacturing cost of biodegradable materials could also be classed as a disadvantage; it stops industrial companies from wanting to use them. They focus so much on profits they forget about the harm they cause.

But What Is The Problem With Biodegradable Plastic?

The word “biodegradable” is questionable at least when you see the word you automatically think it’s a good thing. But it’s just not. Jacqueline McGlade, a chief scientist, said it best, “bioplastic is well-intentioned but wrong.”

I think she says it perfectly and without seriously increasing the standards, the disadvantages will always outweigh the benefits!

Why Don’t More Companies Use Bioplastics?

On a good note, we are seeing an increase in industrial companies starting to use bioplastics, with many shopping center’s using biodegradable bags and food wrapping.

Also, Coca-cola has pledged to use bioplastics instead of there traditional plastic bottles.

People are starting to step in the right direction.

In the last year, plastic waste has come under fire by the public. I think we can thank Sir David Attenborough for his Blue Planet documentary which showed people the problem with using plastic.

Hopefully, more companies will follow suit in the war against single-use plastic.

I’m sure this article gives you enough information to make up your mind about Biodegradable plastic. I’m just going to leave you with this, plastic is advancing at a rapid rate, but not quick enough.

It’s not just plastic that’s doing harm to the planet, cigarette butts are one of the highest collected trash on beaches. And you can find out are cigarette butts biodegradable right here!