Balloons are the best part of any kids’ birthday, and let’s face it all of us have a fond memory of playing with biodegradable balloons.

I know I have, I used to spend hours flicking my balloon in the air!

The problem is what goes up has to come down at some point. Now my enjoyment is met with horror.

After a popular balloon release, they can travel thousands of miles before falling to the ground, sometimes in areas of natural beauty.

The question is, can you get biodegradable balloons? Or are latex balloons going to overtake plastic straws at being the new bad guys?

Find out everything you need to know here!

Can You Buy Biodegradable Balloons?

Yes, you can, latex balloons claim to be biodegradable; manufacturers claim “it can degrade in the same amount of time as an oak leaf.” And of course, natural latex is biodegradable!

But here’s the deal:

Balloons are infused with more than just natural latex, as you’ll see later. This makes the latex balloons less biodegradable than people think.

So, although they claim to be biodegradable, it might not be the case. To understand, it’s a good idea to know what’s inside of the balloons.

What Are Biodegradable Balloons Made Of?

Years ago, balloons were made with animal bladders, from livestock such as pigs. Thankfully they’ve progressed a bit further since then.

Although at least a pigs bladder would biodegrade quicker than a latex balloon. 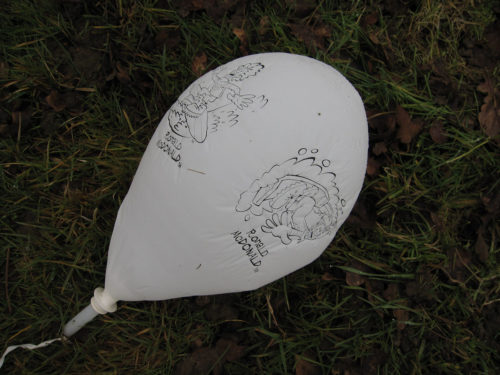 Now, biodegradable balloons are made using natural latex; which breathes and breaks down over time.

The problem is balloons aren’t made with 100% natural latex.

So, what else is in biodegradable balloons?

They have several preservatives inside to promote longer life. Natural latex can degrade quickly, which is why they add chemicals.

A plasticizer is added to the latex to increase the elasticity of the balloons, promote flexibility, and reduce the brittleness of the latex mix.

You’ll also find colored dyes; latex is naturally clear, which doesn’t make an exciting balloon design. They also contain other chemicals that could be toxic to the environment.

Although these chemicals aren’t harmful to humans, it does reduce the biodegradability of the balloons, which is harming the environment.

How Fast Do Biodegradable Balloons Degrade?

A “Biodegradable” balloon can take anywhere between six months and six years before it starts to degrade. Which doesn’t exactly live up to the words:

Biodegradable balloons breakdown in the same amount of time as an oak leaf.

Balloons have been put through varying tests on their biodegradability. One of which was to see how long it took a balloon to degrade is seawater. Unsurprisingly, the balloon still retained its elasticity after 12 months.

But, that’s not the only test scientist and eco-warriors have conducted.

Balloons Blow has been running an experiment for the past seven years. They collected two biodegradable balloons from the ocean, with a plan to document their biodegradability.

They exposed the balloons to the natural environment of their backyard and left them. Seven years and five months later, the balloons are still visible.

You should check out the Balloons Blow experiment; it’s pretty surprising, and also highlights how un-biodegradable balloons are!

Biodegradable balloons aren’t as eco-friendly as the manufactures would like to make out. Once filled with helium, the balloon releases into the sky and makes its way across countries and oceans.

This can pose a severe threat to wildlife for a few reasons. Many land animals and marine life find the color of biodegradable balloons extremely attractive.

Unfortunately they get ingested my animals looking for food. It then blocks their intestines; later leading to death. You should check out this YouTube video, it’s so sad.

It’s so sad to see an animal struggling!

Many states consider balloons to be so harmful to the environment they’ve set new legislation against balloon releases. These states include:

Even the helium we use to fill the balloons can have a knock-on effect. Although helium isn’t a pollutant, and it can’t run out, there’s still only a certain amount of easy access to the gas.

We use the natural gas helium for more things then you might think:

As I said, it’s not like we can ever run out, but we should think about how to use it sparingly. And at least if we stop using helium in balloons, they won’t travel miles out to sea.

So what do we do? Do we keep buying TO Balloons and hope for the best? Or should we find an alternative?

Hopefully, it’s starting to sink in now. Biodegradable balloons aren’t as environmentally friendly as manufactures like to make out.

So let’s stop balloon release events, by finding fun alternatives to latex balloons. Take a look at some eco-friendly options:

The ribbon can be designed with truly biodegradable/recycled materials.

Why not give them to kids at parties instead of the classic T O Balloons brand.

It gives the children something to take home and play with. And even better, it upcycles at the same time.

Children are obsessed with how balloons float. The anticipation of waiting for them to come down nearly kills them!

So, why not try building kites, their floating nature will bring just as much enjoyment!

Again this can be done as an arts and crafts session using:

Kites can be such a great alternative to latex balloons. They can be made relatively quickly and in various colors, black, white, orange, whatever you can find.

You can make them out of paper (or find out is paper biodegradable here) and wood while pinning it together with a reusable pin.

It’s a great way to stop using biodegradable balloons at parties, plus the children get to take them away to play with them.

There are a lot more alternatives to balloons out there why not check out Twitter/YouTube for some further inspiration.

To summarize, a biodegradable balloon is made with latex and various other chemicals. And although latex is biodegradable, it’s not always as black and white as that.

A biodegradable balloon can last a lot longer than companies let on, meaning animals digest them and in some cases, die.

So what should we do about biodegradable balloons?

If you found this surprising, please show some support and share the article, people need to know the truth.

If you have any questions, please comment below, and I’ll get back to you with an answer.

Why not check out my article on biodegradable sunscreen you might find it just as enjoyable.